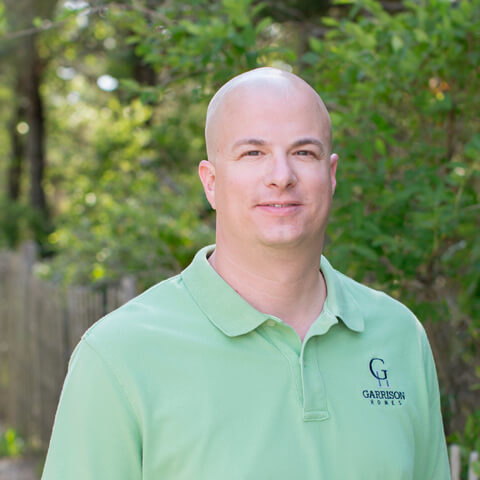 Vice President
BORN IN
Dover, DE
Education or Background
Favorite thing about living in Delaware
Boating, beaches, and sandbars… and as they always say, we are two hours away from everything!
When not at work, you can find me
On the water with my wife, two sons, and two English Chocolate Labs
Friday afternoon beverage of choice
Dogfish Head SeaQuench Ale
Most intriguing part of the construction process
Solving problems
Years of construction or admin experience
20 years
GH is awesome because
We have a more diverse portfolio than any other builder in the area. At the end of the day, we stand behind our work.

Eric Brough grew up in Southern Delaware and spent his summers on the shores of the Delaware beaches. His passion for building started during his summer breaks from West Virginia University when he worked jobs in both carpentry and plumbing.

Eric joined Garrison Homes in 2004 as the General Manager and was promoted to Vice President in 2008. Currently, much of his work focuses on the intersection of Garrison Homes’s sales initiatives with the company’s wider mission and vision.

When new clients initially reach out to Garrison Homes, Eric guides them through the sales process, working closely with them for their entire project. He is responsible for bringing on the design team, the selection team, and the estimation team at each stage of project preparation. Eric also coordinates the resolution of any issues which may arise during the building process to ensure that client needs are consistently met. After projects are completed, he maintains frequent communication with clients in order to foster a long lasting relationship with everyone he serves.

In his free time, Eric enjoys boating with his wife Kristen, his sons Kaleb and Xander, and his dogs Scout and Ox.